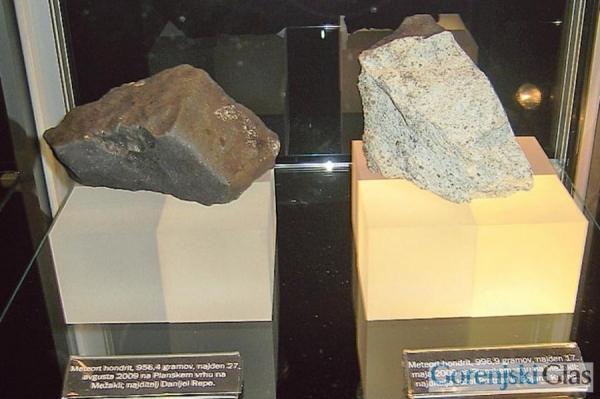 On 9 April 2009 at 3.00 a.m. some inhabitants of Carinthia in Austria and the Upper Sava Valley in Slovenia were woken up by scary rumbling noise. The Jesenice fire-fighters who were on duty in those early hours because of a forest fire noticed a bright trace in the sky which appeared above the Karavanke and then disappeared behind Mežakla. About 300-kg meteoroid entered the atmosphere on 9 April at 02:59:45 CET at the speed of 15 km/s.  During its 4-second bright path through the atmosphere the meteoroid fell into several smaller fragments, which was confirmed also by eyewitnesses. Three pieces (996.8 g, 361 g and 256.4 g) fell on Earth. The first piece of meteorite was found on 17 May by Jožef Pretnar and Bojana Krajnc, Ralph Sporn and Martin Neuhofer found the second piece on 21 July, and the third one was found by Danijel Repe on 27 August. Scientists were observing the meteorite all the time and even recorded it. It is one of only eleven meteorites with a known orbit, which means that it is exceptional also worldwide. Only two meteorites have fallen on Slovenian territory. The first one fell in the surrounding of village Avče in the Soča Valley in 1908 and it is kept in Natural History Museum in Vienna, while Mežakla meteorite (stone chondrite) is the second one and it is kept in Natural History Museum of Slovenia in Ljubljana.