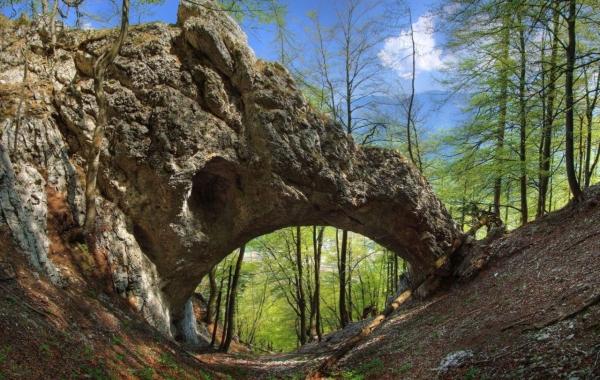 On its northern side, the slopes of Mežakla are very steep; due to weathering lots of rocky material breaks off and falls along the slopes. The natural bridge just below the northern edge of Planski vrh was formed by water erosion and the weathering of rocks of various degrees of hardness. The left side of the arch transitions widely into a side ridge, while the elegant arch on the right bridges the steep gully. It is highly likely that the limestone formation is a more resistant remainder of a former cave ceiling. It is estimated that the bridge is 15 m long, and the 3 m wide arch rises up to 8 m above the gully. Due to its shape, some call it the “elephant”.

In the vicinity of the natural bridge some precursors of spring can be found, such as drooping bittercress (Dentaria enneaphyllos) or three-leaved anemone (Anemone trifolia). The rocks of the steep northern slope are home to auricula (Primula auricula), a protected plant, and spring heath (Erica carnea) among others.