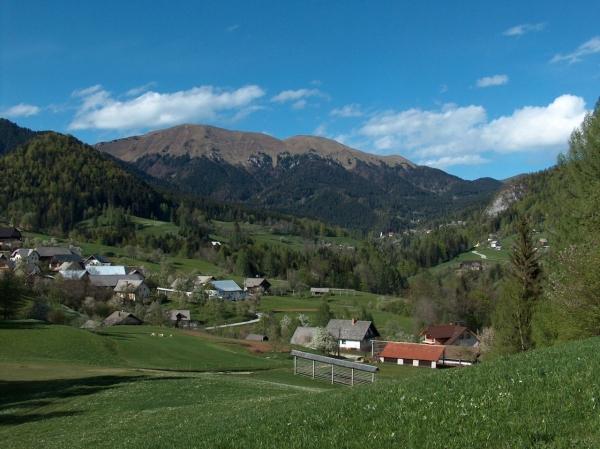 Golica is one of the most noticeable and green mountains in the Karavanke. All paths start in Planina pod Golico. It is only an-hour walk along the shortcut in the direction of Savske jame to the famous and friendly mountain hut on Golica (1582 m). The path along the ridge is much longer (2 to 3 hours) and more tiring, but much more rewarding because of wonderful views. It is not far from the hut to the top of Golica (1835 m) although it may seem closer than it really is. Golica is famous for fields of daffodils. On lower fields they are in blossom already in May while at higher altitudes you can admire them in June. There are a lot of mountain flowers on rocky ridges. Among others you will be able to admire hawksbeard (Crepis bocconi) and Alpine clubmoss (Diphasiastrum alpinum).  Brown Alpine grayling and reddish rattle grasshoppers are flittering there. During the descent to the valley you will be able to admire green-blue dragonflies. The most famous popular folk song Na Golici, which is also the most popular polka in the world, was named after Golica. The song was written in the 1950s by Slavko Avsenik, adapted by Vilko Avsenik and played by Ansambel bratov Avsenik (Brothers Avsenik Ensemble).