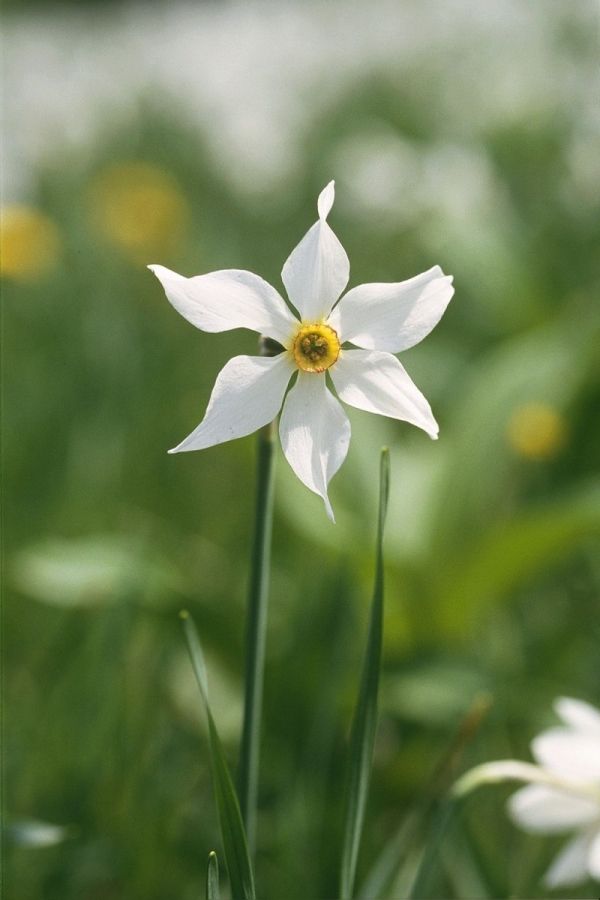 In May, all the west-facing slopes of the Karavenke Mountains are painted white with the daffodils, or keyholes as the locals call them.

Most of these pleasantly smelling white flowers with a yellow and red sun in the middle can be found on the meadows between the villages of Plavški Rovt, Prihodi, Planina pod Golico and Javorniški Rovt.

The inhabitants of these villages tell the story that once upon a time, God warned the bees not to harvest honey on Sundays and holidays. The bees did not listen. So the God locked the path to the honey by creating a little knob in the stem below the blossom. The bees were tamed and, at least for the locals beneath the peaks of Golica and Rožca, the locked daffodils became – keyholes...


In May the slopes of western Karavanke are covered in white daffodils, called ključavnice by local people. They belong to family Narcissus, Latin name is Narcissus poeticus subsp. Radiflorus. Most of them grow on meadows among villages Plavški Rovt, Prihodi, Planina pod Golico to Javorniški Rovt.

Word ključavnica originates from a fairytale...
"Once upon a time God warned bees not to work and gather honey on Sundays and feast days. Bees did not obey him so God „locked“ the honey in daffodils. The sweet sap used to flow into the blossom but God created a small bump on the stalk below the blossom which prevented the sap from flowing into the blossom and bees can not sip it anymore."

It has 5-8 mm wide leaves, petals are of an egg shape, turned inside out, and they partly cover each other, stamens are of various length, short corona with a distinct reddish wavy edge has the shape of a bowl. It is a bulb which starts growing immediately when the snow melts and it lives for three years. After flowering it is important that the leaves remain green and thus allow storage of food in the bulb for the growth next year. Leaves are poisonous for animals when they are green. These beautiful white flowers can be preserved only by the traditional way of farming and regular late mowing in June.  Meadows can be fertilised only by home-made fertilisers and it is prohibited to leave the area to be overgrown. Daffodils are protected by Ordinance on the protection of rare or endangered plant species (Official Gazette of SRS, No. 15/78). It is not allowed to pick, cut or intentionally destroy daffodils.