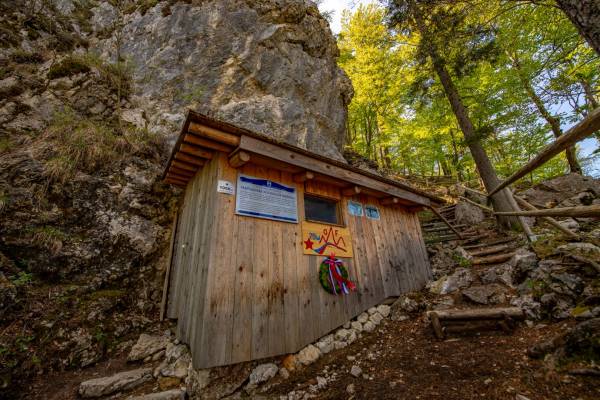 Never did the enemy discover this little house in the middle of the forest where the wounded recovered from their injuries. And their heavy thoughts ...

The hospital is located east of Zakopi, under Mežakla’s rocky northern edge, at an altitude of 1,050 m. It was the first partisan hospital in the Gorenjska region and was built in December 1942 at the initiative of the partisan doctor of the Gorenjska unit, Dr. Edvard Pohar. The shelter was named Clinic D in July 1943.

The wooden object, of rectangular layout and with a mono-pitched roof covered with shingles, rests on the rocky overhang. It was initially intended for the medical treatment of the wounded, but it later served only as a refuge for wounded persons and couriers. Water was obtained from a spring in the cave next to Špica, and food was provided by families from Podmežakla.

The shelter was never discovered by the occupying forces since the very steep terrain made it extremely difficult to access. Due to its location underneath the overhang, it could not be seen from the valley.