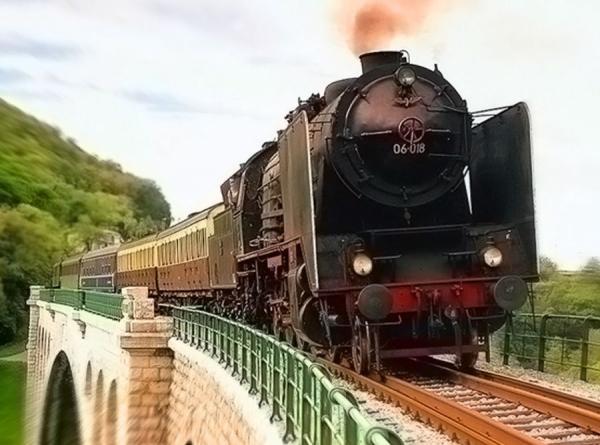 Ride on a vintage train through Slovenia

Journey from the Alps to the Mediterranean along the Bohinj Railway. Experience the thrill of the steam train, learn of its rich history, characters and traditions, and of course soak up the stunning Slovenian scenery. This is an unforgettable trip, a chance for you to be part of a living museum.

A JOURNEY ON THE BOHINJ RAILWAY

Not far from the Austrian border are Jesenice and the station where we catch the train that runs on the Bohinj Railway. We are taking the train for a pleasant journey on the remarkable, 100-year-old Bohinj Railway. Picturesque towns and mountain villages flash by, and after the bridge across the Radovna River gorge we pass through a tunnel and stop in Bled. Above this world-famous tourist resort with its lake and island a proud cliff rises on which Bled Castle stands guarding all this beauty. After Bled we pass through many tunnels and the railway line follows the valley of the Sava Bohinjka River, which narrows and then opens to reveal Bohinj, a region that like Bled is a paradise below Mount Triglav surrounded by the steep peaks of the Julian Alps. Here we can experience the peace and tranquillity of Lake Bohinj and the endless beauty of Triglav National Park, Slovenia's only national park.

We continue our trip through the 100-year-old tunnel that measures 6,327 meters and is still Slovenia's longest, and from the alpine world we emerge in Primorska, a very different region with a Mediterranean climate and vegetation. Through Baška grapa gorge, whose steep green slopes rise dramatically on both sides, we soon reach the Soča River, which charms us with its unique emerald colour. The entire Soča Valley is a monument to the victims of World War I and the battles Hemmingway described in A Farewell to Arms. With its beauty, the Soča Valley fascinates all its visitors and entices them to activities on the water, in the mountains, and in the air. Riding along the river at the foot of the hills of Goriška Brda, one of Slovenia's best known winegrowing regions, and across the Solkan Bridge, whose stone arch is the largest of the world's railway bridges, we reach the Goriško plain with its vineyards and orchards of peaches, cherries, figs, and other fruit. We stop in Nova Gorica, which together with its sister city of Gorizia on the Italian side of the border has become a symbol of coexistence between the countries of the European Union. Nova Gorica boasts several attractive casinos and is a starting point for exploring Kras, the world's archetypal karst region.

“On the journey, which lasted only a few hours, we saw rivers and lakes, mountains and plains, high hills and low hills, valleys and karst, canyons and the endless sea. You are small but spectacular, my Slovene homeland!” observed Maks Klodic, Count Sabladoski (from A new Railway from Carinthia through the Karavanke Mountains, the Bohinj Mountains, and across Kras to Trieste. A Short Description of the Railway from the Technical and Tourism Viewpoint. Slovene Mountaineering Society, Ljubljana 1905).

FOR A SAFE TRIP WITH THE STEAM TRAIN WE RECOMMEND

To follow the announcements that you hear through the sound system on the train.

We enter and exit the train only on official stops (Bled, Bohinjska Bistrica, Most na Soči, Kanal and Nova Gorica). When doing so, we must be alert to any other incoming trains.

During the trip do not open any windows (because of the risk of smoke, sparks and branches along the railway line).

We treat the train with care and responsibility (we do not step on the seats and we keep the train tidy), because that is the only way that the steam train will serve its purpose for a long time.

We wish you a pleasant trip.